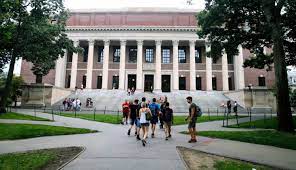 Our once-respected institutions that embodied independence and classical liberal ideals have literally sold their souls to the Chinese communist party for pennies on the dollar. An article in the Spectator points out that in the heat of the initial response to SARS-CoV2 in February 2020, a debt-burdened residential company that basically operated as a wing of the CCP, reached out to Harvard and Harvard Medical School’s Dean for a possible donation of 115 million dollars. This donation was contingent on Anthony Fauci’s involvement and contact.

Instead of contacting Fauci through normal channels, the Chinese conglomerate utilized a private university, at which its influence is supreme, to manipulate our government’s response to the origin of the virus that caused the destruction of some lives and livelihoods. Today, we focus on how these institutions became mouthpieces of a country and party that is the antithesis of their charter and why the corruption of these institutions is so fundamental to destroying the foundation of our beliefs.

The Harvard connection: Was a Fauci-endorsed Chinese donation part of the lab-leak cover-up?

I have given this article to countless people since JUNE of 2020 and it gets ignored: I believe it is a major smoking gun.

Join us weekdays at 5 pm ET and the encore at 10 pm ET on America Out Loud Talk Radio. Listen on iHeart Radio, our world-class media player, or our free apps on Apple, Android, or Alexa.

Given the dysfunction in the American medical system in the response to Acute COVID, it is not surprising that this...

Science, and specifically the practice of medicine, requires discourse. Discourse includes many forms, from lively debates on opposing hypotheses to collaboration and sharing of ideas. This past weekend at the FLCCC Inaugural Educational Conference of Spike Induced Diseases (https://covid19criticalcare.com/flccc-educational-conference-october-15-2022/), collaboration, mutual respect, and knowledge sharing were the foundation of the event.

After a whirlwind of information blasting through mass media in the past two and a half years, it is often...

Listen to Concerned Doctors latest podcast below: Ministry_of_Health_or_Ministry_of_DeceitsDownload As the new booster, or as the Biden administration calls it, the...

As the information comes to light about just what happened in the early months of 2020, the real power brokers are starting to reveal the inner dysfunction and disputes. A recent interview with Dr. Robert Redfield revealed that he was unaware of all that was happening until the freedom of information act (FOIA) showed the emails and communications between Anthony Fauci and Francis Collins in the critical days of January and February of 2020.

Do you hear that sound? Those are footsteps running by you towards the door. The past few weeks have been...